Long Lost Lovers was nominated in four categories at the upcoming University of Winnipeg Film Festival.

The festival will screen 30 student shorts made over the last year. The films where selected out of 81 entries, the most since the festival began.

“We’re very lucky to have this festival, and we’re lucky to have some tough competition which has forced us to work harder. It really helps grow a filmmaking community at the ground level,” says Corey. “I’m thrilled to be nominated.”

Corey and Danielle also commented on the lead Actor, Kevin Anderson’s nomination, “We’re happy very happy for Kevin, he worked so hard and always worked in a calm and patient manner. We plan to work with him again if he’s willing to work with us.” 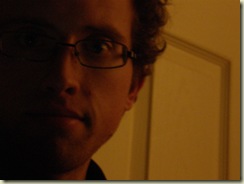 “This was our ‘leaving university warm up’ film,” says Corey who mentioned several projects that are in the works but still being kept under wraps. “This film from the screenplay forward, was me challenging myself to try a more conventional style and to step up our game without using external funding.”

Long Lost Lovers will be premiering at the festival on Wednesday, April 22nd.

Looking Behind / Dashing Ahead

Danielle’s work at the Manitoba Society of Artists’ OJCE 2017

Check out the Café Scientifique Panel on High-Tech Humans